And so back to Korea….

I flew back to the Korean peninsula at an incredibly historic time. The North Korean leader Kim Jong-un has become the first leader of his country to visit the south in over 65 years. Along with his wife Ri Sol Ju, North Korean leader Kim has been spending a lot of time with South Korean President Moon Jae-in and his wife Kim Jung-sook (I am not making these names up. Really.). The two leaders have even been seen holding hands listening to some trashy K-pop music. Scenes almost unthinkable only a few months ago.

While the war between north and south was never officially declared over it seems that we may now be on the brink of that huge step. The North has even reset their clocks to line up with the South – who incidentally do not alter their clocks like we do in the UK/Spain. That means this time around I am only 8 hours ahead of the UK and 7 ahead of Spain.

On my first visit to Korea the President of the USA Donald Trump was in the country. Much sabre rattling followed with Trump and Kim trying to show who was the toughest. Well, all that seems to have been a charade now. Time will tell of course. Suffice to say that President Trump is not getting any credit from the main stream media (in the UK at least) for these historic events. Despite his firm stance, visible support of his allies in South Korea and Japan; plus of course his visit to China (almost immediately after he was elected). No surprises though. Heaven forbid the media suggest that he may have had a hand in any of this.

My second visit coincided with the winter Olympics in South Korea where the two countries put out a joint North/South team.

This visit I will be here with North Korea’s leader. Or at least just after; and who knows?….

Since I arrived the powers that be have organised a meeting between President Trump and North Korean leader Kim Jong-un. Supposedly set for Singapore. An even bigger surprise was the release of U.S. prisoners form North Korea. Is this the first step to a unified Korea? If it is the end result will be a long way off.

The North Koreans have even synchronised their clocks with the South. Who knew they were ever an hour different? Possibly the North wanted to be in synch with their one ally in Beijing. It’s a little like Spain. Why is Spain an hour ahead of UK time. The Greenwich meridian passes through part of Spain and Portugal and the Canary Islands are on UK time. Admittedly that pat of Spain is Catalunya. Maybe the Catalans could do the opposite of North Korea and un-synch their clocks with the rest of Spain to follow Greenwich Mean Time. Now there’s a thought…

Another little coincidence: I bought a new book to read on the long journey and while over in the far east. It is “The Korean War” by Bruce Cumings. It is almost a forgotten war for us in the West due in no small part being over-shadowed by the war in Vietnam just over a decade later. I shall be reading it with one eye on the current news. And naturally there will be a quick review in a future post.

This is NOT Engineering…

I had only been here a few days when disaster struck. The sole of one of my site safety boots came off. It was raining heavily as well. How typical!

Fortunately I was able to make a quick repair using some blue tape I found on the ship. Hardly good engineering eh? Still, it did the job until I made it back to the support centre where I managed to acquire a set of partly worn boots that fitted perfectly. They are mine now. 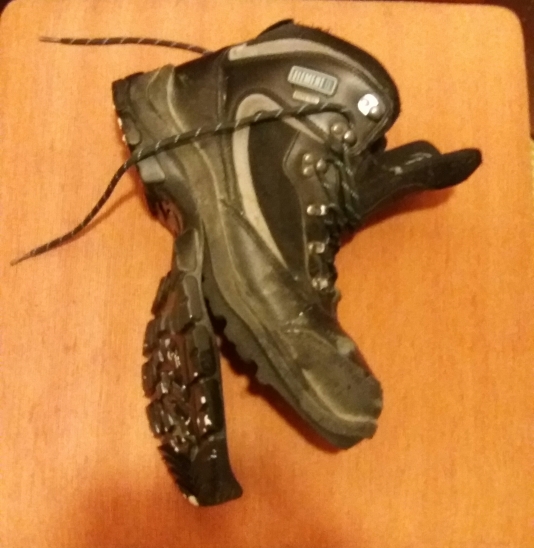 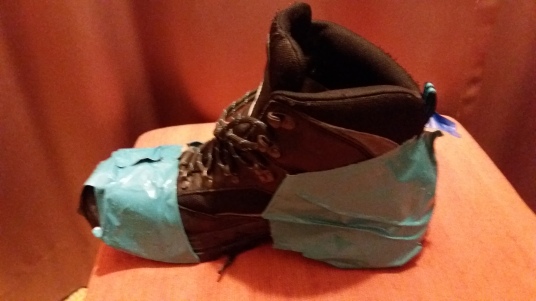