Weighing up the cost…

When the price of a ticket is at least €200 and none of the teams is one you support it is just not worth it.

Add to that the fact that out of two squads of players I only know of one player. A certain Carlos Tevez, who has played for several European football clubs and now plies his trade at Boca Juniors. And as it turned out he never even made the starting line-up! I do not follow football much these days, but it turns out that Dani’s auntie Natalia – who does follow it – also did not know any of the other players. In the end there were a couple of other players who came on as substitutes had played in Spain. I only half knew them.

We tried. We went to the stadium a few hours before the game and witnessed some of the build-up. The atmosphere would be tremendous. That was a certainty. Argentinian fans are equally famous for that. They were always going to create an atmosphere the likes of which the Bernabéu has (quite possibly) never seen.

They usually refer to this fixture El Super Clásico. – presumably the term El Clásico not being enough. That is for the league meetings between these two teams. This one however had been deemed far too important. La Copa Libertadores at stake. This one has been called El Mega Clásico!

Before we left the area we had a drink in a bar opposite the stadium. It was amazing to see fans of both teams drinking beer in the same place. I am sure that would never happen in Buenos Aires. I even heard a River fan wishing some Boca lads good luck.

We did buy Dani a souvenir scarf. He didn’t seem too concerned about the game. Thankfully he is still too young. All that will come later. 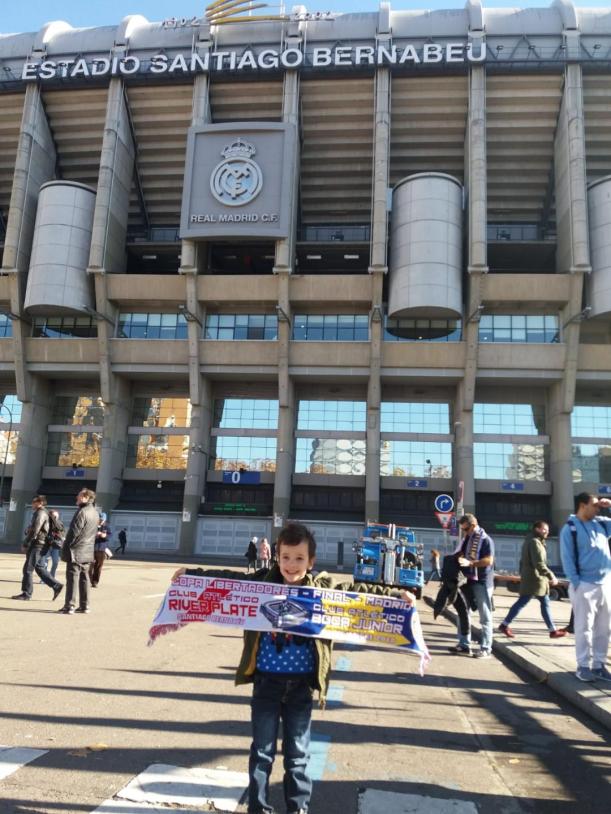 River Win, but so does Madrid

The final score was 3-1 to River. A decent game that was decided in extra time. It was a great victory for the club but there was another winner. Madrid had managed to pull this thing off. At relatively short notice. If there was a FIFA World Cup (mundial) to be held at short notice then Spain could just be the place to do it thanks to this effort. And who knows? The next World Cup is due to be in Qatar in 2022. A lot has been said about the chances of that not happening…. I wonder; do the power players in Spanish football know something we don’t?…

One more thing about the game. Dani correctly predicted the winners. He is bloody good at that. I need to start placing bets on his forecasts.

Up to the game all was fine. If anything is going to happen it will be after the game when one side has lost. The other set of fans will be celebrating. That may be late into the night and early hours. As I left for the airport first thing this morning there was no news of trouble. Which has to be seen as a minor miracle.

It has been said that Argentinian football is like its politics. Chaotic. While the fans at last night’s match would have been surprised to share the stadium with the opposition supporters they would have also been confused at not being caged in. Mind you that is as much for the protection of the referees in Argentina as it is about hooliganism… An interesting weekend.

2 thoughts on “Update – This Crazy Game of Football”