Time for a change I thought. The Catalan saga rolls on and I am sure I will feel the need to report more on that one. But for now, a change of mood…

One of Dani’s favourite classic Disney cartoons is 101 Dalmatians. I liked it myself when I was a kid but recently having seen it far too many times I am growing a little tired of it. Then one day recently I became very intrigued by it. Out of the blue. I suddenly found myself wondering where I had seen that Cruella de Vil woman. Seriously. Then it hit me. She is exact image of Cherie Blair the wife of former Prime Minister Tony Blair. An animated doppelganger no less.

Now it is fair to say that Cherie has been the butt of many a joke and has been called her fair share of names in the media. In today’s digital social media age you could call it trolling. With names such as The Blair Witch, the Wicked Witch etc… but never, as far as I am aware, has anyone spotted the likeness to Cruella. Look at the following pictures and judge for yourselves. 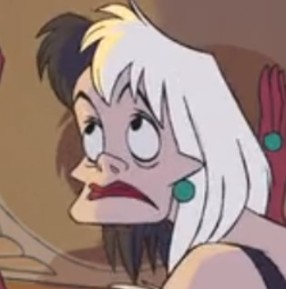 Don’t try to tell me you can’t see the likeness. Come on! A little red lipstick and a little bleach one side of her hair and voilá! It is as if she was made for the part.

Imagine my surprise when I discovered that there is a film being made for release next year (2018) called ‘Cruella’: A live-action feature film following the evil exploits of Ms. de Vil, and the lead role has been given to actress Emma Stone. I am sure the make-up department will do a sterling job on miss Stone but surely the part should go to Mrs. Blair?