I mentioned in a previous post how this shipyard had huge sections of hull lying around waiting to be assembled in to the classic ship shape. Like giant Lego sets. You can read that post here. It seems my son has been looking at the photos I sent over of some of the ships in this yard.

He must have been so inspired that he made this fantastic vessel out of his Duplo Lego. Complete with extremely tall bridge section. And he made it all by himself. 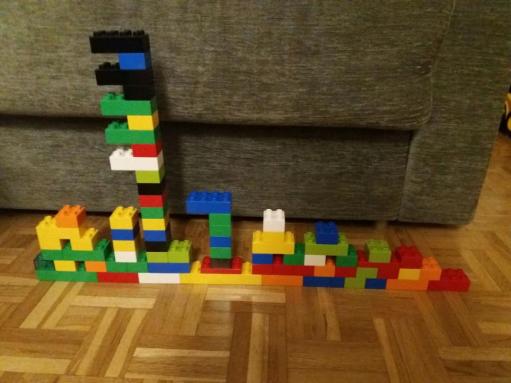 I was very impressed: Proud even. Maybe he thought it was a cargo ship and that tall bridge section would allow a line of sight when fully laden. There is even what appears to be a crane in the mid-section. Excellent observation.

Not quite. As it turns out it is a ship but not the ocean going kind. This super structure is a space ship.

A Galaxy Far, Far Away…

Star Wars is very much back in fashion for this four year old. I was informed that he has recently been watching a couple of the movies on TV. With new episodes being released at a rate of almost one a year since Disney Studios bought the rights the TV channels are showing older episodes as part up the build up to the newest release – somewhere around Christmas time.

Since watching the films his fascination for the characters has reached a new level. Add to that the fact that he now has new Star Wars pyjamas covered in Storm Troopers. They are the best. These cloned soldiers from a galaxy far, far away are now his favourite characters. Naturally like any kid his age he knows plenty of the other bizarrely named characters. And he won’t stop talking about them to anyone who will listen. This includes his grandmother who has no idea what he is talking about.

So confused was his grandmother that she went out and bought the box-set of the first three episodes so she could study them and know what he was talking about.

That is to say the second set of three episodes (1 – 3). As any Star Wars fan will tell you, the very first film in the franchise was Episode 4.

The only problem is that now she has been ‘studying’ the films she is even more confused. Unable to accept the story for what it is there are now too many questions. Not so for a young boy. It must be the (two) generation gap.

It’s going to take a four year old to explain it all.