As promised in a post at the turn of the year here is a little review of sorts for 2017.

Last year saw the usual mix of sad, tragic and exciting news stories from around the world. One which was both sad and tragic (for me) was the story of Charlie Gard, a subject I dedicated a few posts to last year.

For my young son 2017 saw the end of his first year of full time school and the start of his second. As a result of all this he is now displaying basic reading and writing skills. He still has a long way to go of course but it is great that he starting to pick it up having only just turned four years old.

Dani also had his first caravan holiday in 2017. That most British of holidays in a trailer home right on the British coastline. It was also the year that he became bored of flying. No longer a novelty, more of an inconvenience. Such is the life of a modern child. I never flew in a plane until I was 16.

On the subject of travel; he is on his third ID card. The police even let him sign it. He also needs his third passport. These are required to be renewed every two years at that age as the child’s appearance alters significantly over the first six years. Fortunately the cost of new passports is a lot less in Spain.

There was another year that was mentioned rather frequently during 2017. That year is 1967. Why? you may ask…

1967 was an incredible year for many reasons. I could easily write pages about what happened during that year but one thing in particular got me doing some research.

2017 was the 50th anniversary of two huge landmarks in British legal history. This past year was a cause for celebration in the gay community as it was way back in 1967 that homosexuality was de-criminalised. This event received a lot of media coverage throughout 2017.

Also, 1967 marked another huge landmark in society. In August 1967 the abortion act was brought into British law. This 50th anniversary received substantially less attention from the media. By the time you have read this post you may feel that you know why.

Before I go any further I need to point out that I am neither for nor against abortion and definitely do not want to get into a ‘rights and wrongs’ discussion. I sit on the fence when it comes to the abortion debate. Not something I do very often as I tend to see most things very much in black and white. However, that said, these facts will almost certainly surprise you – if not shock you.

The Least Safe Place in Britain

Since being made legal there have been over nine million abortions in Great Britain. That may seem an unfeasibly high figure, but it is true. You can easily check the statistics online yourselves if you find it hard to believe. Especially when you realise that over 50 years the numbers average out to about 180,000 per year – which do not seem unrealistic. Still the overall total is something that should be considered in more detail.

That figure becomes even more incredible the more you examine it. Nine million is higher than the populations of many countries such as Serbia, Austria, Switzerland, Paraguay and Denmark to name a few.

It all begs the question: Does anyone know where the least safe place in Britain is? The answer might scare you, but it is both obvious and very real. That place is a woman’s womb. That may not be an “official” government statement but it is an indisputable fact.

Meanwhile the Catalan saga rolls on. December last year saw regional elections with some of the main players either being locked up or in self-imposed exile in Belgium. The election results basically left us exactly the same as before the unilateral declaration of independence with the Catalan parliament having more or less the same make up.

Fortunately Señor Puigdemont uses his trusty droid to communicate in meetings from his new home in Belgium, somewhere on the planet Tatooine. 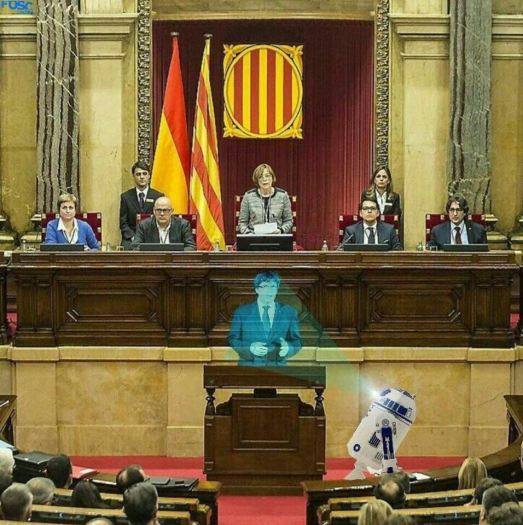 Back to the Present…

Less than a month into 2018 and most of the UK news already this year has been about the collapse of a huge industrial giant – Carillion. This large company has collapsed despite having been awarded plenty of multi-million-pound government contracts. Hard to imagine isn’t it? Some 20,000+ employees are said to be now out of work as a result of the collapse. Although in reality most of the skilled workers will have already found other work.

I have a tale about Carillion and more specifically the managers of such companies which I will share with you in my next post.