These type of jobs can go on and on. At least I have been told that. It occurred to me today that if there is to be a third working trip to Korea then it just may fall on my own birthday. Ironic considering that on the first trip I missed Dani’s and now am about to miss his mum’s

The ship I am working on is now surrounded by five FPSO (floating production storage and offloading) vessels. When the oil price is low the first thing the oil companies cut back on exploration. Some ship owners pay to moor their vessels and keep them ship-shape (so to speak). Ready for that inevitable rise in oil prices.

Even the new builds have been put on hold. The client refuses to take delivery so they do not have to pay the final instalments.

Someone always pays in the end though. Usually you and me 😉

Here’s an interesting photo taken outside a place called the Tapas Disco. Seemingly pretending to be some kind of Spanish themed restaurant. I am yet to try it but will report on it as and when I do. It remains a mystery as to where the disco comes into it but I will endeavour to find out.

This is a large window to the side of the restaurant. There are famous faces – some historical, others from the world of show-business.

In the meantime see how many of these characters you recognise. Just in case you don’t know some of the historical figures their names are included. Zoom in and test your knowledge. 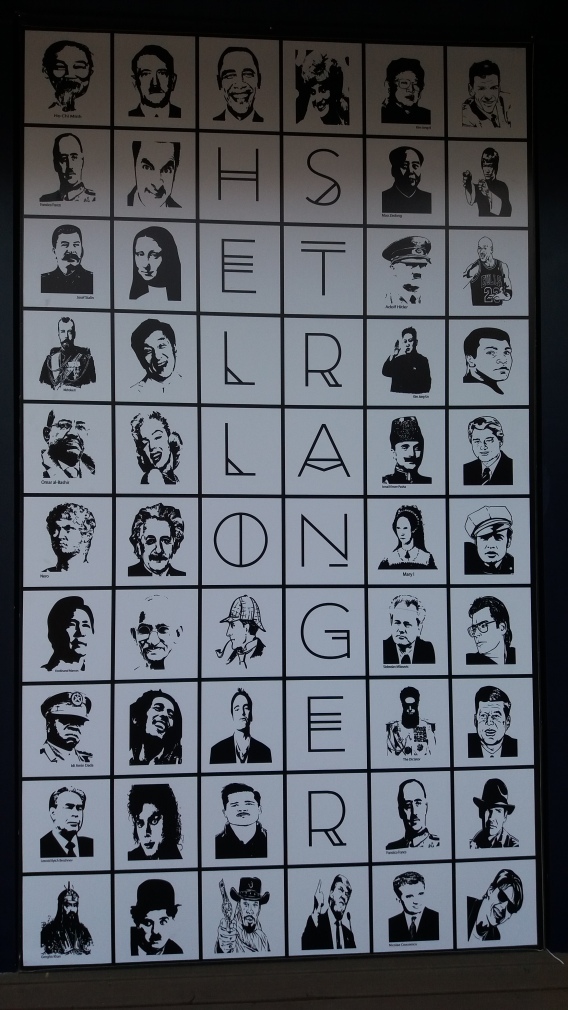 The winter Olympics come to South Korea with the opening ceremony tomorrow. Not that you would notice around here. I am yet to see as much a s a souvenir T-shirt. I am sure it will be all over the TV but I will only see the highlights after work just the same as everyone in Europe. I am sure once it starts people will get into it. Personally I am only interested in the men’s downhill skiing. The rest is of little interest.

The winter games is always the poor relation of the summer Olympics. This time around is no different except for one big story. There is a Korean team. All well and good you may say. Personally I think that once the games have finished the cold war will resume. Probably with a vengeance. Speaking to some of the Korean lads at work it is clear that the South Koreans now see their northern neighbours as a completely different country. Apart from that being an obvious statement it has deeper meaning. The South Koreans no longer see the North Koreans as being the same as themselves. Perhaps that’s understandable after nearly 65 years of separation.

It has been sunny but cold here this week. With the added wind-chill factor, very cold. Especially first thing in the morning when the sun is just rising.

The ship is docked in the final quay on the yard before the open sea. When I stand with my back to the heavy industry and look out I see tree covered mountains, open seas and bright blue sky. It really is quite a beautiful place.

Then I turn around to walk to the ship. Which only goes to show; you can’t win them all….