This time of year is the Feria de San Isidro in Madrid. This year there was a slightly different kind of event for the kids. More on that below But first a return to an old post for Dani…

Return to the Tree…

Way back in March 2016 I wrote a post called Plant a Tree, Have a Son, Write a Book. This weekend – over three years later we returned to the Parque Felipe Sexto (the park named after King Philip 6th) where Dani planted his tree.

Amazingly, three years ago we never took note of the exact location of his tree. In these days of GPS coordinates we did nothing. When we planted the tree in 2016 I remember that the weather was awful. Wind and rain. At least that accounts partly for us not making a proper note of the tree’s location.

So it turned out to more of a guess than anything. We found two possible suspects but probably neither was his tree. Still he seemed happy enough to pose beside both. Judge for yourselves below…

The first one seems a little big for three years old while the second seems too small. Not to worry. We decided it was the first one. I am sure he will see the funny side when he is old enough to read this.

Interestingly there were plenty of new trees with names and dates written on the supports, planted last January. It gave me the idea that maybe we should do this again – properly this time – with his cousin Susana.

Susana joined us in the park slightly later. There is an area with large kids slides built into the natural contours of the park and  zipwire (tirolina in Spanish). That part of the park was packed with families as you might expect. The cousins enjoyed the slides and burned a fair bit of energy.

The Spanish call them huertos. In the UK they are called allotments and are as British as tea and biscuits. However, they are a relatively new phenomena in Madrid. I had noticed a few some years back but now it seems wherever there is enough space between recently constructed apartment blocks the town hall is allowing these places to spring up. During San Isidro this year the town hall has advertised events for kids at selected huertos. So off we went.

The kids learn to recognise what the plants they eat actually look like. They get to water the plants; or at least are allowed to believe that they are watering them. They even prepare some simple snacks with some of the produce.

The day was hot just like the one in the park. It looks like summer is finally here. 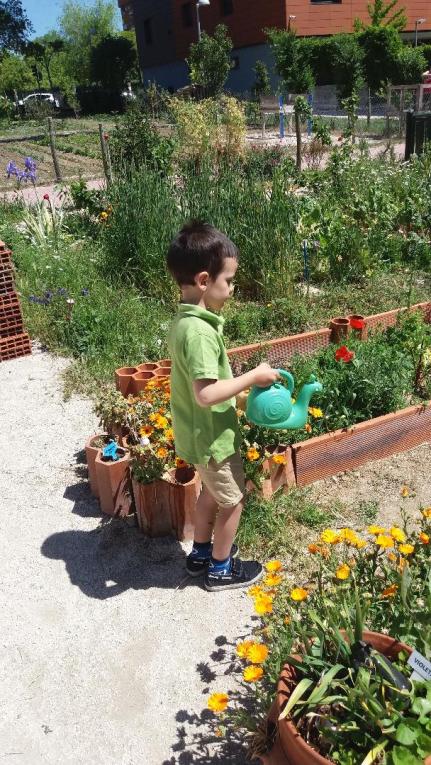 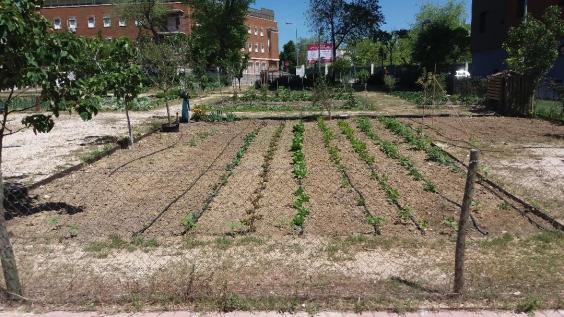 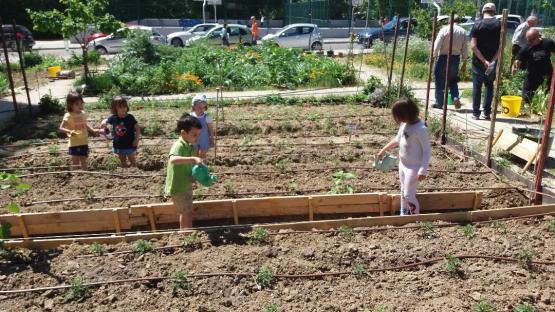