This one is another catch-up post. It was the weekend after Roberto’s Christening. A group of my friends had been planning a trip to Spain for months. The reason was a 50th birthday celebration.  The last one of the group to reach the 5-0 mark in fact. Any excuse eh? And why not?

Another First for the boy…

As Dani’s mum was supposed to be going on another business trip to Australia it left me with two choices. One was to stay in Madrid for the weekend with Dani. The other was to take him down south to Torremolinos and a weekend with the boys. I know which one I preferred but I wasn’t sure about Dani. A weekend away with the boys. A lads weekend. Dani’s first.

We couldn’t get a return train journey to Malaga so we booked an early internal flight. A turboprop plane much smaller than the other aeroplanes Dani was used to. A bit of a roller-coaster ride on the approach to landing at Malaga airport too. A short taxi ride to the hotel and we were there before the main party arrived. It was a few hours before they arrived so we went for a walk to the seafront for some breakfast then had a dip in the hotel pool.

The hotel deal was “all-inclusive” so there was sure to be some steady poolside drinking during the day. Plus the odd dip in the pool of course. I was concerned that Dani might get bored or worse still that he might bother some of the lads . But I needn’t have worried. He enjoyed himself and never really made a nuisance of himself. All of the lads were used to dealing with young kids like Dani. Some are even grandads. Blimey!

There was even a group of hotel entertainers doing their best to ensure the kids and adults alike had fun.

There was never any danger of myself and the lads not getting value for money with either the “free” drinks or the extensive spread of food on offer at meal times. I never really got value for money for Dani’s stay though. He still eats like a . Practically living on just air. Still he ate enough. 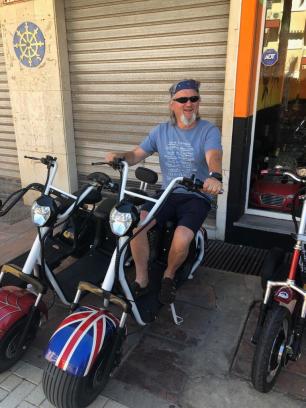 Above: Neil (doing a good impersonation of Willie Nelson) looks like he is trying to form the Torremolinos chapter of the Hell’s Grandads. Meanwhile Dani tries to get in an early application for membership.

One good thing about taking Dani on a trip like this is that my responsibilities trumped any urge to stay out late in the evening. While the rest of the lads were sure to make the most of their short holiday and be out late, I would be fast asleep. Some would stay out very late. I have done it myself many times in the past. Not getting back to the hotel until the early hours of the morning. Hangovers were guaranteed. But not me this time.

We did go for a couple of early evening drinks but soon returned to the hotel. The little fella soon tired.

We had to return to Madrid on the Sunday afternoon but the lads were there for one more night. After we said our goodbyes by the pool we went to collect our bags and order a taxi. Dani was noticeably upset. “I don’t want to go dad” he said, just about holding back the tears. He had really enjoyed his first lads trip. I am glad he did. There will be others.

One of the older chaps is 60 in the not too distant future. A 60th to celebrate? Why not? Any excuse for a get together and the ensuing piss up. Then one of the lads joked; “Then there is always Dani’s 7th!” Any excuse…