What do you think the easiest job in Australia is?

Film or TV star? Easy money and lots of it for sure. But they lose their privacy and are constantly hounded by the media/paparazzi.

Top sports star? Well, they do earn lots of money just for playing games. But no.

Most agents cannot be bothered doing viewings more than twice a week. Even if they are just around the corner. Many only seem to do Saturday mornings.

The agents often don’t even visit the properties to check and confirm details like whether or not the cooker is gas or if there is a bath and/or shower. Minor details obviously. Trivial. Who the hell needs to know such stuff? Only maybe the perspective tenant; I guess… But the estate agents just don’t give a shit. You want to know the room sizes? In most cases forget it. And take your own tape measure. They hardly ever give a floor-plan. They can’t be bothered to go and measure up. Let alone draw out the information on a floor-plan.

Yet another failing is the lack of photos they put online. In this day of digital imagery, it costs nothing to make a few more snaps of a room or building does it? But once again they really can’t be arsed (i.e. bothered)

But here’s the thing:

They don’t have to do hardly any of those things mentioned above. After one Saturday morning inspection someone will make an offer and apply to rent the property. Round here the property would have to be completely ruined for it not to rent. There is a huge transient population in these areas so, all but the worst property is guaranteed to rent with or without an estate agent. And don’t they know it.

The websites say things like: “Arranging an inspection is easy! You can use our booking page to view available times to inspect and pick one that suits YOU.”

They only do one or two inspection slots a week. And one of those will definitely be Saturday morning. Quite often you will receive a text message telling you that the day’s viewing is cancelled. Sometimes that will be because the house has just been leased. Often it will be because they can’t be arsed going to the property just for one person to inspect it. So they wait till the Saturday inspections when they know it will be busy.

Here is another good example. I had arranged to visit a property at 1pm yesterday. I took a taxi. The driver didn’t have a clue where he was going. I had to tell him he had gone the wrong way. This meant I arrived a little late at the property. I phoned the agent. He told me that they had “taken a deposit just this morning” and then asked why I was there. I told him that he had called me two days ago to bring my original appointment forward. Ah. The penny dropped. At least he was apologetic. First verbally and then later via a text message and an email.

By the way, the taxi fare was a real rip off but at least I got to see some streets I hadn’t seen before. Very nice too. A little tour now and again is not a big problem. Especially when you are still getting to know the areas.

It seems wild goose chases are the order of the day around here. But there is always an upside. This property was just around the corner from the Golden Sheaf pub (click to see photo in this earlier post). I concluded that it was about time I ventured inside. And very impressive it was too. Very large with a huge garden bar area and serving what looked like good food. Next time we can all go and have a meal. ‘Every cloud has a silver lining’ as the saying goes…

Here is another great example of what goes on. When they can actually be bothered taking any photos, they often do this kind of thing…

The photo on the left is a still from a video taken by me during the property viewing. The other photo is from the website advertisement of the apartment. 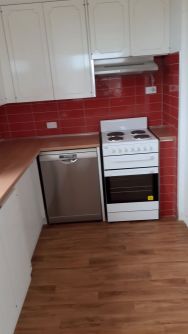 Hello! Forget the different dishwasher for a moment. Where the hell did that sleek new oven and hob go to? Where did that crappy white cooker come from? At least the wall tiles remained the same colour. So not all bad eh?

As stated above, generally the estate agents can barely be bothered taking any photos. There may be only 5 or 6 photos for a 3-bedroom, 2-bathroom property. If you are lucky. But as you can see here it is not only that they can’t be arsed to take photos; they then doctor them!

So, the obvious question has to be: How do I get a job as an estate agent? All jokes aside, it could be an option…