Oh; what a breath of fresh air. Literally.

This weekend is the first chance we have had to get out and go somewhere – different. I just wanted to get out of the city. Anywhere would have done. In the end we went for a well-trodden tourist destination, but it was so worth it.

As it turned out we headed west to the famous Blue Mountains. The Blue Mountains National Park to give it its full title, is a huge area covering some 267 thousand hectares. It is part of the Great Blue Mountain World Heritage Area – an area of a million hectares stretching for 230 kilometres along its ranges.

It took nearly two hours of driving to get there but it was well worth it. Beautiful scenery and open space. Of course, there was the usual crowds of tourists (just like us) but nothing too bad.

With the mountain range covering such a huge area it might be difficult to know where to start. Fortunately, the more famous areas and vantage points that you see in all the travel brochures are clearly signed.

First stop was Wentworth Falls. Parking was tight. We had to do a couple of laps of the car park until someone left. It was one out, one in. Dani needed to stretch his legs, so we set off walking. We spent an hour there including climbing down to the source of the falls. Here is a taste of some of the sights. 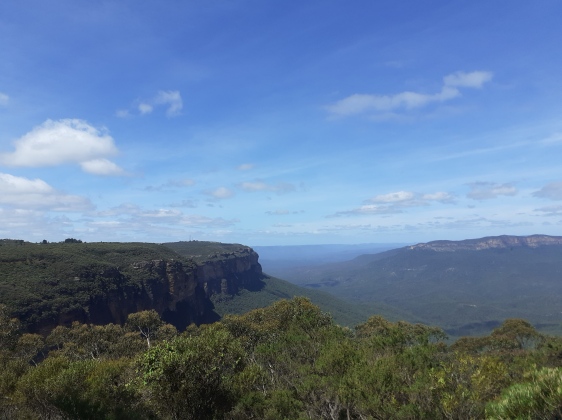 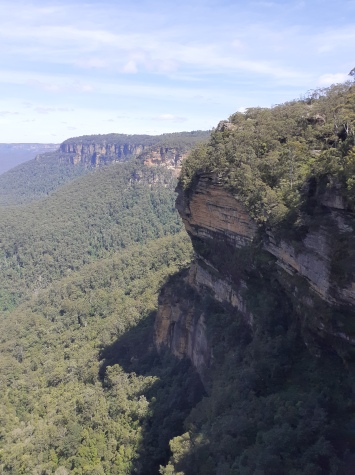 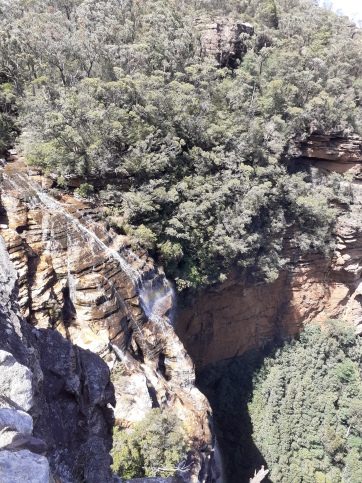 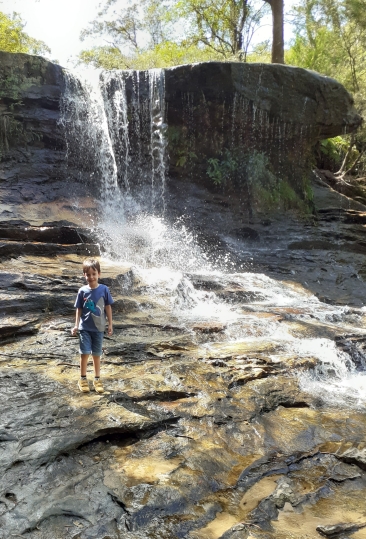 Next top was Katoomba. Another small town – village really – with access to the mountains. This place has possibly the most famous photo opportunity in the area. The famed Three Sisters rock formation. You see it in all the tour guides. 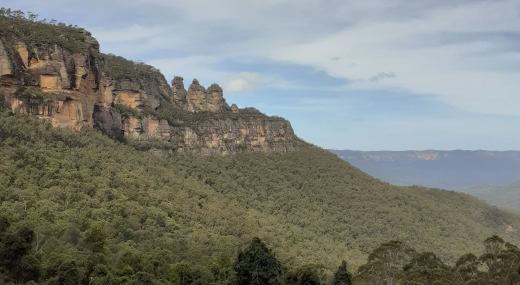 This area also has the ‘Scenic World’ area which is part nature part theme park. It has two cable cars and the world’s steepest passenger train ride (apparently). The train descends over 300 metres at an angle of 52 degrees. That’s 128% drop (or climb) in old money (or is that new money? – I never know).

We took the cable car over the 300m gorge then the train down to the rain forest where there was once a coal mine. After a 10-minute walk we reached the 2nd cable car which took us back up to the cliff top. The back across the gorge on the 1st cable car.

Along the way we met this little fella. At first Dani thought it was the venomous redback spider. It turns out that this fearsome looking rascal is a harmless ‘red and black’ spider. Similar name for obvious reasons but perfectly safe. We called him the red jumper spider as it looks like he has a red jumper with his eight black arms sticking out.

I really needed to get out of the city. This first experience of countryside and mountain air did me the world of good. It totally tired the little boy. He fell asleep in the car while we were still winding our way past other Blue Mountains villages on our return to the big city.

Many of the tour groups we saw today would have been those on a flying visit. This was their one day, tick it off the list, sightseeing of the Blue Mountains. Been there and got the T-shirt.

Not for us. Now we are familiar with the area we can go back again. And again. Please. If it was up to me, I would go there every weekend.