What with all this virus crap recently (none stop every day actually) I thought I had better write about some of the more positive things that have been happening. Otherwise when Dani is old enough to read these blog posts he will say “Dad. You were a really miserable old git when that virus stuff was going on, weren’t you?” And he would be right. So here are three things a little more interesting than the bulk of the news these days…

We made sure we visited the fabulous Hymans Beach again before heading back to the city. It was ideal chance for Dani to try a bit of body-boarding. It’s a good introduction for kids before they learn to surf. I am sure if we end up spending a few years here he will be fully surfing. Before that however, I want him to have some swimming lessons. He has not really done any since his school swimming carnival. That was way back in February! 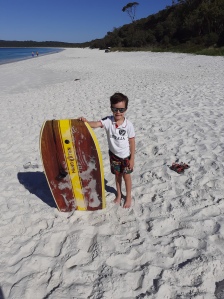 There were footprints in the sand – some of them ours. But hardly a person to be seen. Absolutely fantastic.

Dani loved it in this area as much as his old dad. I could live around these parts. My idea of a relaxed life-style. How I miss that place.

Is this a sign of (very) recent times? Days of toilet roll fights in supermarkets? The toilet facility just off the beach has padlocks on the toilet roll holders. Which is very odd because you can leave a your stuff on the beach and walk to the far end and back and nobody touches it. Yet toilet paper? Crazy times. 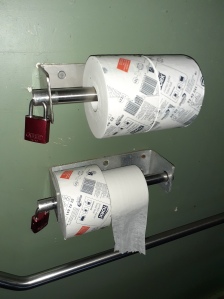 It is like a jungle or rain-forest and very dense in places. A perfect example of how much of the area would have been before the city was built and expanded. Or as the Aboriginal people might say “like it was before the Europeans got here”. Well, not quite that wild maybe. There are more than a few recent man-made additions including the tennis club cafe (seen here next to the waterfall).

We exited the park on the east side up Moore Steps – some 100 of them.  Dani had been here with his class on PE time so he had seen the steps before. He referred to them as “The Stairway to heaven” – obviously what other kids and his teachers called it. I am yet to explain to him exactly what that phrase means to me and many other Led Zep fans.

This place is fairly local so we will be returning again this week. By the way; it was busy. Lots of people still going to parks here.

No, I am not sniffing the stuff. It’s the incredibly low price at the moment that is kind of fun. Less than a dollar a litre. That’s under 50p in old world money. I can’t remember it being that cheap. Is it a good thing though? Once again, economists and “experts” tend to be divided on these financial news items. I am sure it will all become clear when we emerge from the hibernation of CNS (Covid19 Nonsense Syndrome).

I did spot it even cheaper on our drive back to Sydney. It was as low as 85 cents per litre. Definitely great news if you are running a taxi/delivery-van/road-haulage business though. Or if you have an engine driven boat.