OK, it’s officially spring in Australia but the ski resorts in Australia are still just about open. We went to Thredbo in the Snowy Mountains – also referred to as the Australian Alps – hoping to catch the last of the snow…

As the name suggests there should be snow here in winter. Just as there is skiing in the Sierra Nevada  in Spain (literally ‘snowy mountains’ in Spanish). There is a similarly named range in the USA which also has snowfalls. There are a few other ski areas in this mountain range but this was the one that was available – as numbers are limited due to this covid-1984 crap. Ugh… not that again…

But it wasn’t very snowy. There was hardly any snow. Only one run barely open and also the so called ‘basin’ area at the top of this resort. The basin area is in range of the highest peak in Australia, Mount Kosciuszko (generally pronounced in English as  “kosh-UUSH-koh” ) which is 2,228 metres (7,310 ft) above sea level. The ski areas lie inside the Kosciuszko National Park. It was all named by the Polish explorer Paweł Edmund Strzelecki in 1840, in honour of Polish-Lithuanian freedom fighter General Tadeusz Kościuszko. No; I had never heard of him either…

We arrived late Friday after a fairly tortuous 7 hours drive including a crawl out Sydney and a few stops – one to pick up our ski equipment. En-route we stopped to refuel in a place called Goulborn. Apparently the first inland city in Australia and home to ‘The Big Merino’. This huge concrete sculpture of a ram celebrates the wool industry in this area and houses a gift shop at its base. It stands 15.2m (50feet) tall and is supposed to be the world’s largest concrete built sheep. I can’t think why anyone would want to build a bigger one, can you?

It was all pre-booked so we went to pick up our lift passes on Saturday morning. It started off sunny so we had a little ski on the one decent sized run on one side of the resort, then went up another chair-lift to the ‘basin’ area. By now the weather was getting cold but at this time of the year it can change so quickly. Later, it was sunny again.

Time for a quick beverage in ‘The Eagles Nest’ restaurant at the top of the lift. There are great views of the valley and town below from this spot. And those trees again….everywhere you look out in the wild here there are trees…

That hit the spot. And the views were tremendous. 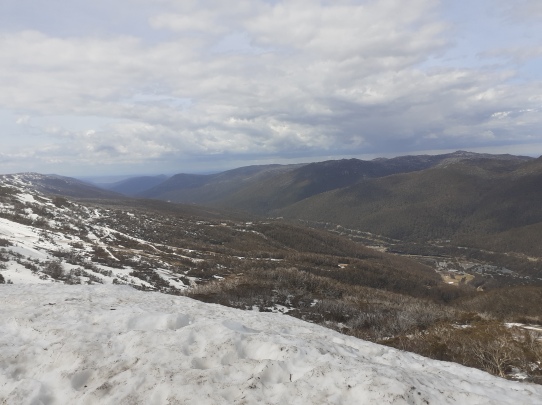 After descending the lift back into Thredbo we decided that Dani should have a private lesson the following day. Because there was so little skiing open they were giving us back some of the money we had paid. We simply transferred it into a lesson for the boy.

By Sunday morning and with a lot of help from the rain the snow on the one remaining real slope had deteriorated badly. It was vanishing by the day now. It turns out that the resort’s snow canons were not working. these are the artificial snow makers that are used to top up the most worn out parts of the slopes especially the lower parts. IF we had known this we would have booked the neighbouring ski resort of Perisher – whose snow canons were working.

Too late now though. Dani got stuck into his lesson while his mum made a few runs down what was left of the piste.  Then the ski instructor decided to take Dani up to the top. It was a long way for him after just messing about on the bottom. He had only been walking up a short way just enough to practice moving then stopping, with hardly any real turns. But up he went. So I followed, a few chair-lifts behind.

It took him a long time to get down but he did it. And he was really pleased with himself. Really happy at what he had done. Great stuff, so was I. Good boy! Now he will want to go again and improve even more. That’s the time to get into something like skiing. He has made a real start at least twenty years before his old dad ever did.

It was time to head back to Sydney. The return trip took a lot less as we never had to fight our way out of the city, and getting back in was relatively easy. We stopped to refuel in the capital city of Canberra where we took the opportunity to drive around the government buildings. The capital will be another trip in the near future no doubt… Also a return to the Kosciuszko National Park should be in order during the summer. After all, these places are all year round resorts just like in the European Alps.