There are several routes you can take from Gunnedah to Bourke. We took the quickest and most obvious one but it was still an interesting journey.

First place we passed was Narrabri. A town of around 6000 people and some interesting old buildings.

We were fortunate enough to catch an old second hand book shop before it closed down. They were giving books away for free – but really asking for any donation. So we paid a small amount and left with a handful of books each.

Just over 20km west of Narrabri is a place of astronomical importance to Australia. This is the home of the Australian Telescope Compact Array (or ATCA for short). This is called the Paul Wild Observatory. It is an array of six antennas, each 22 metres in diameter, used for radio astronomy.

Like all telescopes the rule of thumb is the bigger the telescope the better the range and signal. For radio telescopes, the larger the dish the more detail can be seen (or heard). But having a dish of (say) 100m in diameter is not practical. So, these dishes are connected as if all small parts of a much bigger dish. This compact array mimics a dish of 6km in diameter. The five dishes at this site are mobile while the sixth dish is fixed and located 5km away. The five mobile dishes move on railway track that is 9.6m wide and 3km in length.

The original array can still be seen on the drive into this observatory. Almost hidden by the trees, rusting and only the frame structures remaining. 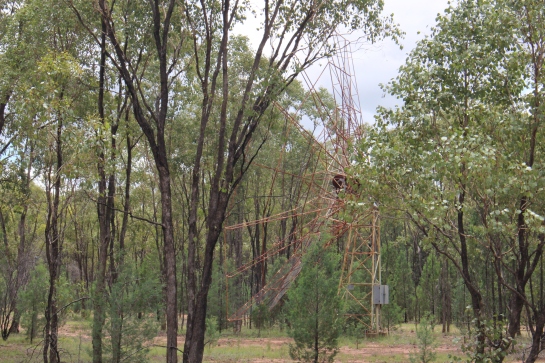 We then made our way over to Walgett to pick up the B76 road to Bourke. That road took us through the town of Brewarrina.

The town of Brewarrina has a small population of not much more than 1000 inhabitants. As soon as we drove into the place I noticed some familiar artwork in the form of murals.

Back in 2019 the Brewarrina Shire Council came up with an art project initiative to add a splash of colour to the town and improve the community’s mental health. The resulting artwork and indigenous culture has brightened up the town and (according to what I have read) the people who live there.

Local children were asked for their input about local culture, indigenous stories and what Brewarrina meant to them. This information was used as a brief for artists John Murray and Jenny McCracken. John Murray we already knew from Lightning Ridge and Dani recognised his artwork immediately.  Jenny McCracken of course painted the water towers in Gunnedah – see previous post – and is (I discovered) an internationally renowned  mural artist and Australia’s most highly-awarded pavement artists. 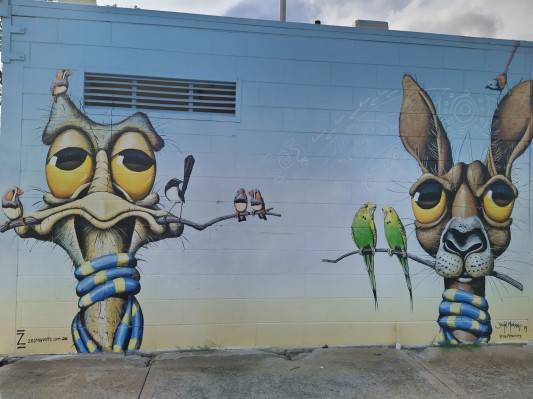 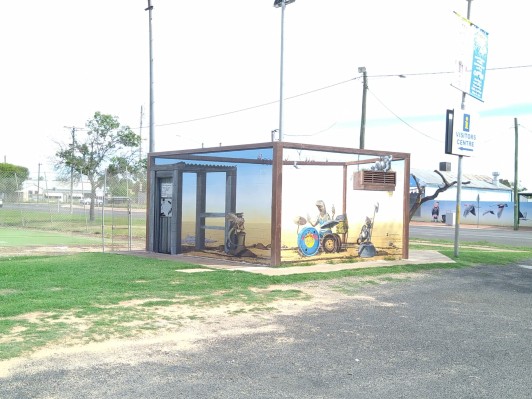 Both Murray and McCracken are non-indigenous so they painted in their own style. The local children then added the finishing touches with traditional dreamtime painting. The results are colourful murals on what were once drab grey or beige walls. 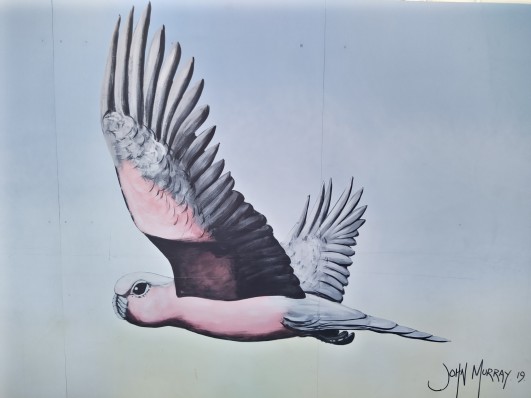 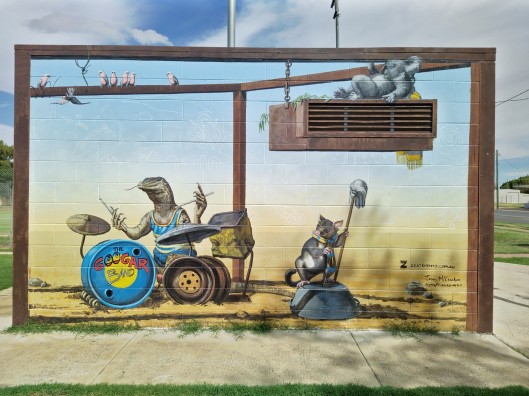 Brewarrina sits on the Barwon river and there is an excellent example of ancient Aboriginal fishing traps. The traditional fish traps at Brewarrina are made up of almost a half a kilometre long complex of dry-stone walls and holding ponds on the river. These fish traps are the largest group recorded in Australia and are cleverly arranged to allow fish to be herded and caught during both high and low river flows.

The Brewarrina Aboriginal Fish Traps is historically and culturally a very important place. It was listed on the New South Wales State Heritage Register in August 2000 and added to the Australian National Heritage List in June 2005.

Sadly Brewarrina, like many other small towns we would see on this trip, is somewhat in decline. The main industry of sheep farming was set up by using boats on the Darling Murray river network back in the late 1800s. The railway line that followed in 1901 was closed in 1974. While farming still exists there are far fewer people passing through the town than in the days of the paddle boats and railways.

One thing I note of when reading about Brewarrina was it was the home of the first Indigenous published author – one Jimmie Barker. I must look out for his book –The two worlds of Jimmie Barker : the life of an Australian Aboriginal, 1900-1972 – as I think that is just the kind of book I will find interesting.

We only planned on passing through Brewarrina on this trip as we would stay a few nights at Bourke. If I passed this way again I would stay in Brewarrina and see more of the area.

Next stop Bourke; the so called ‘gateway to the outback’.