On the final leg of our return journey we went from West Wyalong passing through Glenfell,  Cowra and Bathurst before arriving at Sydney.

The West Wyalong district is the largest cereal-growing centre in NSW. The area became one of the major world exporters of eucalyptus oil in the early 1900s. Agriculture is still what generates the wealth in this part of NSW. Before that however, in the late 19th century the town of Wyalong (5km east) was the centre of a major goldfield. The two places still remain curiously separate but West Wyalong is definitely the larger. We stopped the night in West Wyalong in one of the many motels. For some reason there are a lot of motels on the stretch of road between West Wyalong and Wyalong. I am really not sure why there are so many or when they can all be full. If anyone knows can you please tell us?

It certainly guaranteed us a room for the night. 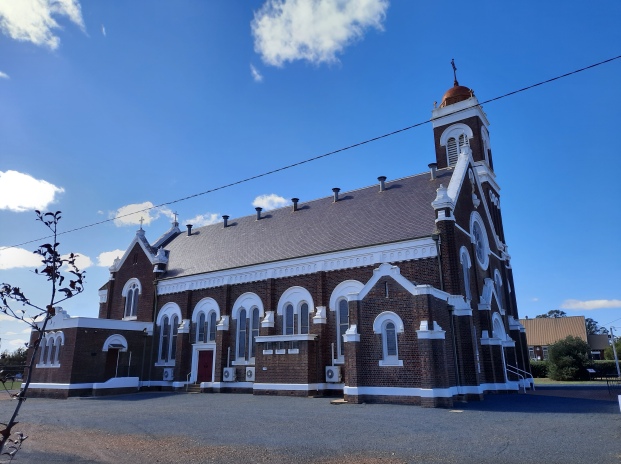 West Wyalong is a busy little place with plenty of shops, pubs and places to eat. Plus impressive churches for a small town.

Further east about 100km is the town of Grenfell. Like so many small towns in this part of the world gold played a big part in the foundation of Grenfell when it was initially called Emu Creek. Nowadays agriculture is the main industry. The railway station was built in 1901 but passenger services ceased in 1974. The station closed but was later restored by local groups and was listed on the New South Wales State Heritage Register in April 1999. It is considered one of the finest surviving examples of a pioneer terminus station with timber platform face

Grenfell is what you might call a quaint old town. There is plenty of old architecture and for its size the town seems to be thriving. Another of those places I would return to and spend more time in.

One of the main attractions here was another fine example of silo art. This fantastic example was painted in 2019 using 180 litres of regular paint and 800 spray cans.

Another 56km east we came to Cowra. It is a small town but for these parts it is relatively large with a population of about 10,000. We only passed though Cowra but stopping only on the north side of the town to see its most famous spots. Cowra is a location that brought the struggles of the second world war right into the heart of Australia.

During World War II, Cowra was the site of a large prisoner of war (POW) camp. Most of the prisoners were Japanese and Italian military personnel. On August 5th 1944, hundreds of Japanese POWs organised a mass breakout from the camp. Some Japanese committed suicide or attacked fellow countrymen while others attacked guards. During the breakout and subsequent recapture of POWs, four Australian guards and 231 Japanese died. A further  108 prisoners were wounded. The dead Japanese are buried in Cowra in the specially created Japanese War Cemetery. It is the only cemetery of its kind in Australia.

Some of the dates and actions on the war timeline (above) made me smile. The one right at the end for example: Norway got brave when it was all but over, declaring war on Japan in July 1945. Exactly one month before the first ‘bomb’ was dropped on Hiroshima.

I would like to take a proper look at Cowra, but for now we just wanted to get home. From Cowra it was just over 300km to Sydney. We did it with only a short break  in Bathurst,  a town we would return to just over a week later….