A slight jump back in time to last January. From Parkes it was off to the outback. Bourke (again). The road to Bourke would be as follows: West from Parkes to Bogan Gate, then north to Nyngan via the small towns of Trundle, Tullamore  and Tottenham (I’ll call them the three “T”s). Then Nyngan to Bourke on the Mitchell Highway.

Bogan Gate is a railway junction with a branch line that extends north to the three “T”s Although none of the three “T”s are directly on the Bogan river they will certainly be using it as a source of irrigation for the agriculture that clearly makes up the economy of this area. 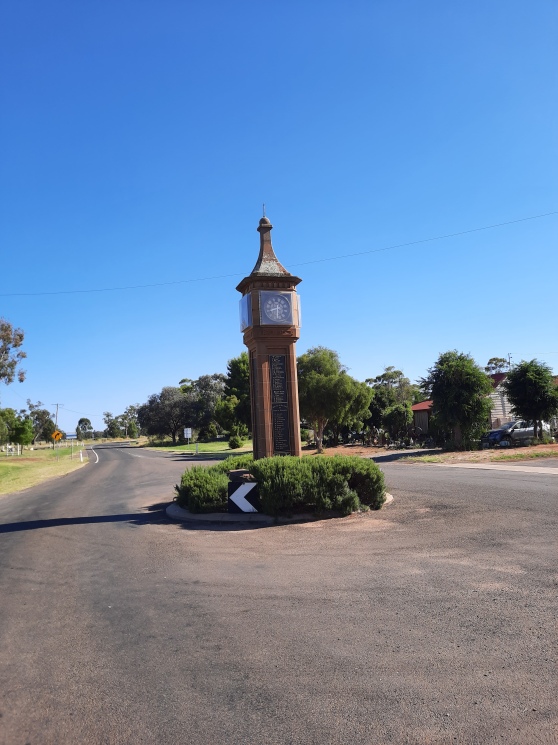 One town on this route has found another source of income. Trundle has taken a leaf out of Parkes’ book. Parkes celebrates the undoubted chart topper of the 50s and 60s in Elvis Presley (along with the Beatles of course in the 60s). Trundle has jumped on that bandwagon with the help of (undoubtedly) the top act of the 1970s in ABBA. Yes; Trundle hosts an annual Abba festival in May. Apparently some well known Abba tribute bands go there to play – such as Bjorn Again (yes, I have heard of them). Yet Trundle is so small. Where do the revellers stay? I won’t worry too much about that just yet… If the event goes ahead this year it could be huge as the Swedish quartet have recently reformed and released a new album – their first in 40 years (I think?).

All three “T”s are quaint, photogenic little towns. Tottenham perhaps the most neat and tidy. It makes a claim of being the centre of New South Wales. Yet just outside the little park where that boast is made sits a road sign telling us that the centre of NSW is actually some 45 km away. Go figure… Well, Tottenham is the nearest town to that epicentre I guess…

Nyngan and The Big Bogan

Bogan is not only the name of the large river in this area. In more modern times the word has come to be something of an insult. Or at best a put down. Australians refer to anyone living out in the countryside/outback with (let’s say) not much of a formal education, as Bogans. Ironic really because that is how most (if not all) Australians were perceived to be like in the UK until fairly recently. Interesting how Aussies have developed a bit of a snobby class culture eh? I bet there are many in the UK who may be surprised at that…. But I digress.

It’s kind of like referring to someone as a hillbilly, hick or even redneck in the USA. Also quite similar to calling someone a “chav” in the UK.

Here are the unofficial (I guess – are there any truly “official”?) definitions, judge for yourselves:

Bogan: an uncouth or unsophisticated person regarded as being of low social status.

Chav: a young person of a type characterized by brash and loutish behaviour (usually with connotations of a low social status)

Tourists passing through Nyngan would stop and take photos with the various signs displaying the word “Bogan”. So some bright sparks on the council decided it would be a good idea to build a big statue of a “Bogan” style man in the modern interpretation of the word. That way tourists could have their photo taken with the big Bogan and put their town on the map. A self-effacing way to get their small outback town noticed. And why not? The people of Bogan shire never asked for the name to be used as a modern day insult did they? I think it is a great idea. And here’s the an himself…

Nyngan has some great old buildings. It is a small town but there are enough shops and cafes to encourage tourists to stay there for a few days or more. (Although I was just passing through.)

I thought this next one might have been some place of historical importance and the name intrigued me. Beancounters House? What could that have been in the past? But nah! It turns out to be just a name the owners came up with for a boutique hotel and café….

The road between Nyngan and Bourke is part of the B71 – aka the Mitchell Highway. This particular stretch is impossibly straight. Just look it up on google maps! Apart from a couple of kinks in the road at certain roadhouse-type locations this road is perfectly straight for over 200 kms. The road builders had something to follow however. There is (or was) a railway line from Nyngan to Bourke and the road runs right alongside it. The track is still there, visible most of the way. Those Victorian engineers certainly knew how to make a railway line. Not sure what the hell happened since but that’s another story… That’s over 400km of cold hard steel rail just lying there rusting away. Meanwhile the wooden sleepers have all but deteriorated. What a waste of track! In this age of high speed railways this 200km perfectly straight section would have made a perfect test site should Australia decide to join the high speed trains era.

That’s 400km worth of old rail track (which would have been well made) – at current scrap metal prices that track would fetch between $5 and $8.5 million. But getting it all out and transported would take a huge effort.

Finally at Bourke. Now the task was to find out whether the outback unsealed roads were open. The aim was to drive along (at least part of) the famous Darling River Run. More to follow….