After so many days of rain and being trapped in Sydney we finally managed to get out of the city last weekend. The weather forecast was sunny so we headed for a walk in the middle of the Blue Mountains.

If you are crossing the Blue Mountains by road (or rail) the town of Lawson sits just about at the half-way mark. Lawson has a population of over two and a half thousand and is a typical Blue Mountains town. The aim of this visit was to walk the south Lawson circular walking track and take in the five main waterfalls on the route.

This is yet another example of how much was achieved all those years ago when these areas were only just being opened up to those living in the city. The track was completed in 1900. So most of what you see is the result of the original hard work. Especially the staircases carved into the rocks. Whatever they do these days, right or wrong, it’s fair to say that way back then they definitely did things well. Of course, these places are subject to flooding and rock falls so require constant maintenance. There was plenty of evidence of that on our walk. Mud, flooding and rock falls made it hard going in places.

The route takes in the four main waterfalls. Junction Falls is actually made up of two different cascades where two streams meet. Hence the name. Notice the two different spellings for one of the falls. Adelina on one sign and Adeline on the other. I believe the correct spelling is Adelina.

With all the rainfall we have had recently there was always going to be enough water to make the falls worth seeing. In the past we have visited waterfalls in the Blue Mountains area when there has been only a mere trickle of water. Obviously when it is raining heavily a day trip to these parts is more or less out of the question. But last Sunday we dropped lucky. It was a fine sunny day for the most part but the amount of rainfall the previous week meant guaranteed photogenic waterfalls.

It’s easy to forget when you are following a reasonably well marked trail that you are actually in the middle of a huge expanse of temperate and tropical forest. Especially when you are looking down to navigate the mud and rock slides. All the while you are completely surrounded by dense vegetation and dramatic gorges. The small towns of the Blue Mountains are great little places. I love them. But they are mere specks in the vastness of this natural wonder.

The route we followed was meant to take about one and a half hours, but after stopping for some time at each waterfall and with some tricky parts of the path to navigate (thanks to all the rains) we took almost two hours. 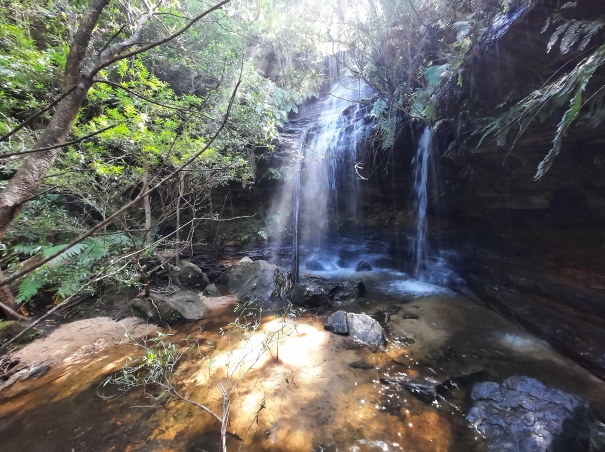 We have visited the Blue mountains many times now but have only just scratched the surface. There is so much more to see there. A great excuse to keep going back – as if one is needed…