Lego. Simply the greatest toy ever made. Fact.

I do not think there is anyone out there who would argue with that.

My experience with Lego even predates the popular minifigures; or Lego people as we used to call them. I remember those Lego people coming out (no, not in that way; being released onto the market) back in the late 70s.

My love of Lego has been re-ignited by two things. One of course is my son Dani who already enjoys playing with construction type toys. The other reason I am back into Lego in a big way is because of the wonderful and inspiring film The LEGO Movie.

I first saw the film on an aeroplane when Dani was less than a year old and I realised that I would soon be enjoying all that fun of playing with Lego all over again. After years of not particularly bothering with the toy my renewed interest went into overdrive.

Since then I have been slowly building up a collection of Lego for when Dani is old enough to play with it. He is going to love it and so am I.

It’s good to see that there are fellow dad bloggers out there who are into Lego in a big way. Although generally (almost totally in fact) much younger than me their interest in the toy would have probably come from the more modern sets. However, they would have all gone through the same process of learning to build simple things with the basic bricks. The perfect learning platform for children.

Of course all parents already know that Lego is the best thing that ever happened to kids toys. They don’t all rave about as much as some of us but hey; they know.

Back to the earlier days…

My earliest memories of Lego date back to when I was about 5 years old. My siblings and I had uncles working in the Lego factory in our home town. Long closed down now of course. We had huge boxes full of the different bricks that had apparently fallen off the conveyor lines during production and packing. These were simply swept up and of course ended up in the hands of children related to the workers. I didn’t realise at the time how lucky we were.

It was a totally random selection of course but we didn’t care. In those days there were not that many types of brick available anyway so we pretty much had everything we could have wanted or needed to build with. Real Lego, real play.

Those old bricks came in only a few colours. White, black, blue, yellow and red. I seem to recall that some (but not many) were grey or green. The blue, yellow and red colours were very bold and referred to as “bright red/yellow/blue” by Lego. These days there are lots of colours and in varying shades too. Almost like an artist’s palette.

It really didn’t matter to us how many different brick colours there were. What mattered was that we had plenty of them. With so many we could build whatever we wanted. Or so we thought. If we had seen one of today’s intricate Star Wars sets back then we would have flipped out.

Looking at the new bricks I do wonder if they are the same quality as those originals. They do not quite look the same to me. Or am I just being too nostalgic?

But who am I to stand in the way of Lego brick development? The basic bricks are more or less the same as I first remember and the new sets with all those special pieces really do make anything possible. 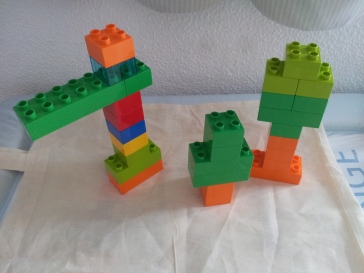 Two trees and Cranky the crane.

2 thoughts on “LEGO. Simply the Best.”