Last Saturday was Father’s Day in Spain (día del padre). It falls on 19th March which is also known as St. Joseph’s day – the father of Jesus – hence Father’s day.

In the UK father’s day is celebrated on the 3rd Sunday of June so the date is not fixed. It is easy to see the link behind the Spanish Father’s day date but less so for the UK.  Apparently the origins can be traced to an American lady called Sonora Smart Dodd who thought as many others did that fathers should be recognised as equally as mothers and so have their own special day. Like many other celebrations that came from the USA we followed the tradition in the UK soon after.

Well actually not that soon. I can always recall Mother’s day but in my early years there was no such thing as Father’s day. I am guessing that it must have crept in around the mid 70s.

Does anyone know for sure?

It’s hard enough remembering one such event in a year but now we have to remember two. It is the same for Mother’s day of course.

In Spain Día de la Madre (Mother’s day) is always on the first Sunday in May. In the UK Mother’s day is celebrated on the 4th Sunday of Lent, or 3 weeks before Easter Sunday so maybe another Christian link there. I am told that May is the month of the virgin in Spain and hence the virgin Mary (mother of Jesus). There would seem to be a Christian link similar to father’s day for the Spanish. I think the Sunday thing is  – just like in the UK  – because most people do not work on Sundays.

Dani made me a key ring. He is very clever but I am sure he had help.

Wait a minute. Is that supposed to be me in the car? He missed the beard… now two months old and soon to come off in the big shave off challenge. Stay tuned. 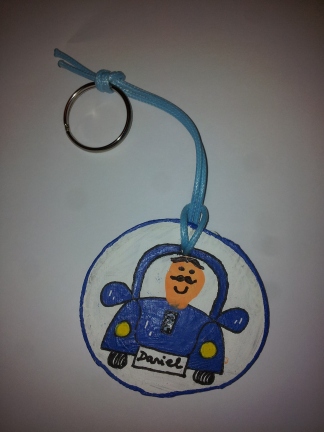