In just over two weeks time Dani will be three years old. Where did all that time go? Yes, the usual question we ask ourselves with young children growing up so fast. With all that is going on in the world – and indeed Spain right now – we often hear people use that phrase: “We are living in interesting times”. But wasn’t it always thus?

Born During a Rubbish Collection Dispute

When Dani was born there was a city wide bin-man’s strike in full flow. The streets were strewn with rubbish. It reminded me of the bin-men’s strike back in the late 1970s in the UK. Yes, I am old enough to remember that.

The situation was made worse by some of the more militant strikers who had been opening the little lamp-post mounted bins thus rendering them unusable. I think that they thought this would make the streets look even more horrific – which of course it did – and so give them the upper hand in negotiations. I honestly cannot recall how all that ended; but end it did, soon after. I seem to remember that the mayor of Madrid in those negotiations was one Ana Botella, the wife of former Prime Minister Jose Maria Aznar and Madrid’s first female mayor.

Meanwhile, the mayor of London at that time was one Boris Johnson and as luck would have it a character based on Boris appears as the mayor of Elftown in one of Dani’s favourite TV programmes – Ben & Holly’s Little Kingdom. When I noticed the character a few weeks ago I immediately thought of Boris and lo and behold that little elf mayor is indeed based on Mr. Johnson.

It all goes to show that being a clown prince of fools counts for as much as any real skills these days. 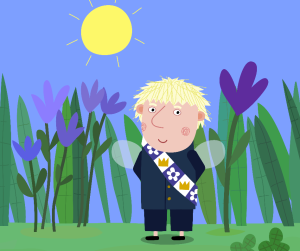 Boris is the Mayor of Elftown.

Back to the Present…

Three years on and Spain is still technically without a government after 10 months and two general elections. However, news hot off the press suggests that there may soon be at least an officially recognised Prime Minister. The main “socialist”  party (PSOE) – after an internal rift, see previous posts – agreed to vote for the current Partido Popular leader Mariano Rajoy to continue as Prime Minister. In reality they have only  agreed not to block that path. At the same time they have also vowed to block the next budget proposals – which they have not even seen yet. So despite appearing to support the appointment of a Prime Minister they will basically vote against anything he has to say. At least this will avoid a third general election in one year, or so they say. But it does not look good. Deadlock guaranteed for the next 3-4 years. Great eh?

Where is Señor Boris when you need him? It seems Spain could use some of his Elf magic. Then again, maybe not…