Not so in Benadalid. That week the town – in reality a very small village – puts on a week of shows (espectáculos). It is called Bajo la Luna – literally under the moon – a street festival of cultural events (Festival de cultura en la calle).

The Bajo la Luna week culminates in a full-blown stage production by the townspeople. Last year it was The Lion King, this year it was Sister Act. The village square (plaza) is packed full of people for these events. They have become so well known that people come from other villages right across the area. 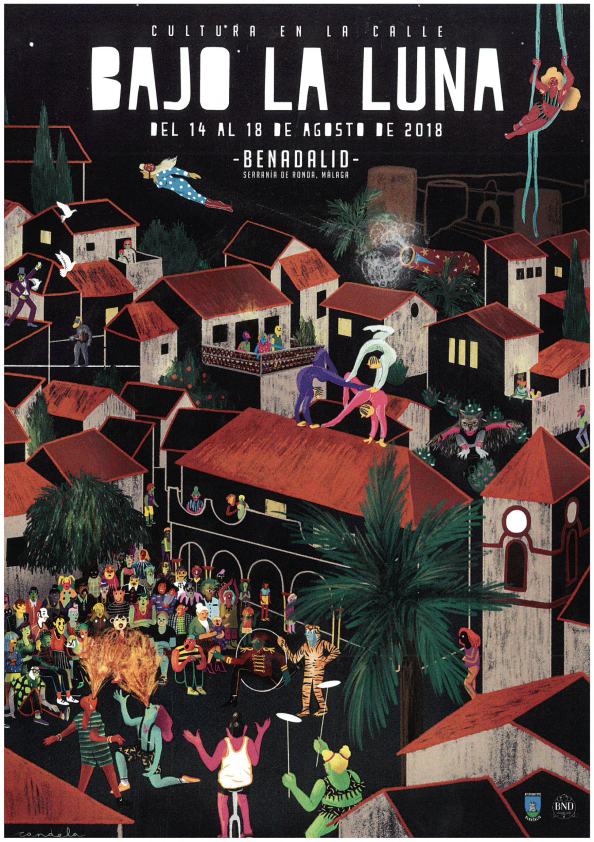 This year the Bajo la Luna poster was designed by Candela, a 2nd cousin to Dani. (One of his mum’s cousins.)

In the valley below the village there is a small river. The Rio Genal. I wanted to take Dani fishing. At least some form of fishing.

“Not a net! That’s for babies”. Well, that said it was also a little early for a full fishing rod and tackle. I decided to try one of my first fishing methods. The old fashioned but well proven minnow trap. (Minnows are a breed of fish which do not grow more than 2 or 3 inches but the word ‘minnow’ is often used to describe any tiny river fish.)

I first went fishing at the age of 5 with my grandad – also called Daniel. He showed me how to catch little minnows using a ‘minnow trap’ made from and old whisky bottle. The type with a big dimple in the bottom. For those who do not know about these devices here’s a quick and simple explanation:

The trick is (was) to knock a hole in the dimple. The dimple creates a cone down which the little fish swim into the bottle. Once inside they can’t get back out. All you need inside is some bread or similar bait to attract the fish and submerge the bottle until all the air is gone and leave well alone. Several fish will enter every time. To remove them simply unscrew the bottle top and pour out.

Today however it is much more difficult to find a suitable glass bottle, so I made our ‘minnow trap’ out of plastic bottles. Of course, way back then there was no such thing as a plastic bottle. Seriously; I am struggling to recall when I first saw plastic bottles but it was much later than my early fishing expeditions. Certainly a good use for all those empty plastic bottles; I suppose it is a form of recycling… Not that I am one for shouting out their ‘green credentials’ – I most definitely am not!

We only had the small half litre bottles available on the day we went down to the river. So we made do and set off with a new minnow trap in hand.

The Genal river flows continuously – even in long hot summers – in the valley below Benadalid. It manages to avoid the fate of many a dry river in the south of Spain thanks to a natural spring that is fed from water collected whenever it rains. It happens to rain quite frequently in one part of the region so the Genal (and another river not too far away) remain relatively full of fresh crystal-clear water. And there are plenty of fish. You see them everywhere. Mostly tiny young fish but there are also enough larger ones visible from both the river banks and when you wade through or swim in the water. Naturally there are all sizes in between.

Success. We caught more than our fair share of tiddlers and even a few the size of Dani’s hand. For our next trip I planned to make a trap from 2 litre plastic bottles – the hope being that we catch more of the bigger ones.

Here you can clearly see some small fish already trapped while others check it from the outside.

It’s a great spot. There is even a small tourist industry based around the river with camp sites and a couple of restaurants. Unfortunately (if it is fair to use that word) this means that there are more than enough people; tourists and holiday-makers to spoil the tranquillity. And, being Spanish, that they certainly do! Not long after midday gangs of noisy families some with dogs appear. All jumping in the water (whether on two or four legs) right where you think you would like to fish. If we want to try some proper fishing here we will need to come early.