It has been a busy Christmas period. Dani certainly seemed to enjoy it and was more than happy with what Santa brought him. Basically, what he asked for in his letter to the man in red and white. He certainly delivered on the Lego front. He was even pleased with a new pair of shoes. That surprised the adults in the room. Usually kids are not too impressed with clothing as presents. Good for him.

There was also a retro surprise in his stocking. An apple and mandarin. Just like his old dad used to get. Ok; I also received some “proper” presents back in the day… He was happy with all of it.

And yet on Christmas Eve  I could hardly get a smile out of him when he planted his “Santa please stop here” sign. He can change moods at the flick of a switch. I wonder where he gets it from?

Dani is now quite excited by the new year’s celebrations. Now that he is old enough to stay awake and witness the final seconds of the old year making way or the start of the new.

It is odd just how many of Santa’s little helpers there are these days. Even more odd is that most of them seem to be found in pubs.

Dani managed to spend a fair amount of time with his little cousin this Christmas. A pair of elves at times but both looked smart when it came to dressing for dinner. 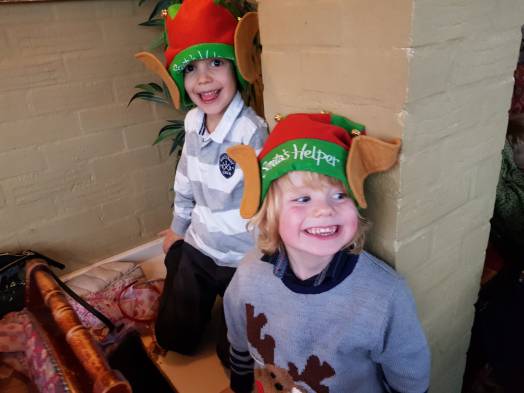 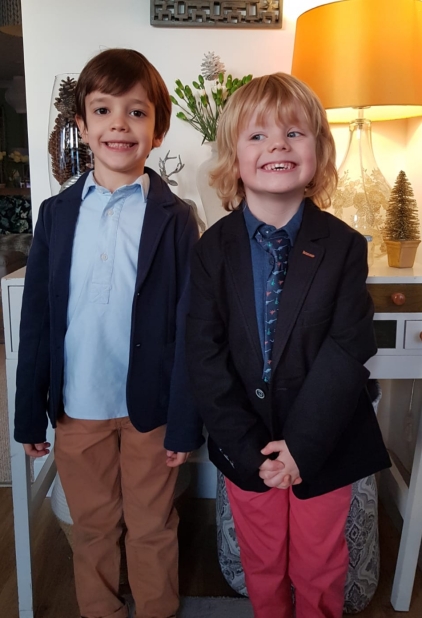 While the young boys ate well, this old dad really over indulged. This is the first time I have ever eaten myself to a standstill. Quite literally. I have heard people talk about eating too much over Christmas but never done it myself. Naturally I always eat my fair share – and then some. But this was a first. I could not eat or drink another thing by early evening It felt like I would never be able to eat ever again. Then lo and behold; Boxing Day *was more-or-less a repeat. How on earth did I manage that? I still don’t know…

So now is the time to regroup and take it (slightly?) easier for a few days. Now it is back to Madrid for the new year and another big feast on its eve – Noche Vieja.

Good food and good wine. Plus a few beers maybe. It is what the Christmas celebrations are all about for me. For my son this year has been mostly about Lego. And on that note he is happy; and with the three kings still to come…We are not even half way through the twelve days of Christmas.

*Footnote:
For those who do not know… Boxing Day is the day after Christmas Day. The 26th of December, known in many countries as Saint Stephen’s Day. The term “Boxing day” is, I believe, a mainly British thing. It comes from the days when the servants to the rich traditionally worked on Christmas Day and were given boxed gifts to take back to their families the following day. Hence Boxing Day!  Well, that’s one school of thought and as far as I intend to take it. But if you know a better quick explanation of the meaning of “Boxing Day” please let us know.