At the risk of sounding geeky, I was interested in seeing inside this museum from the moment I found out about it. On second thoughts: Who doesn’t like money? So, what’s geeky about this trip? Nothing. It was interesting just to see the old banknotes. Doesn’t everyone like that? OK, for those geeky enough to want to know more read on…

Situated on the ground floor in the corner of the Reserve Bank of Australian building this museum is not exactly on the beaten track. But I thought it was well worth a visit.

Inside the History of Aussie Banknotes.

First thing to note (no pun intended) was that this place only covered banknotes. The coin history museum is supposedly in Canberra. A little disappointing but I already knew before I entered. As if to compensate for the lack of metal money on display there is no entrance charge. Who can argue with that?

There were some early examples of gold coins that were made during the Australian gold rush period (circa 1870-1914). Aussie gold was used to make gold sovereigns with the ruling British monarch’s head on – Queen Victoria. Other than these examples however it was all notes.

It turns out that Australia never had their own real bank notes until the 1920s. But that was still the Pound and it was still tied very much to the UK.

I had always wondered when and how the Australians ditched the old colonial Great British Pound for the more American sounding Dollar. Obviously not enough to look it up but anyway; this was clearly the best place to find out.

On the 14th of February, 1966 the Australians moved to their own, new currency of Dollar and Cents. They called it ‘decimalisation’. It was not only decimalised by moving away from the old (British) Pounds, Shillings and Pence system. This was the creation of a completely new currency. The old British system had 12 Pence to a Shilling and 20 Shillings to a Pound. That’s 240 pennies in a Pound! It may seem a little confusing to youngsters these days, but it really wasn’t. There were some benefits to the old non-decimal system, but I will not go into them right now. If anyone wants to know then please write a comment in the blog and I will reply.

Interesting side fact: Also in 1966, Japan replaced the UK as Australia’s main export market. (Or are the two things linked???)

Pound to Dollar – The Name Game

Even the name of the new currency has an odd story. I always assumed it was the natural process of the Americanisation of the world. That possibly Australia just conveniently stumbled into having a dollar to tie in with their new Vietnam War buddies the USA (Australia entered the Vietnam war the previous year in 1965). But no…It’s a little more interesting than that.

Initially, in 1963, the government wanted to call it the ‘Royal’. Almost trying to break away softly from the old ruling country. There were over 1000 crazy names suggested in a pubic naming competition at that time including: the Roo, Oz, Boomer, Kanga, Emu, Koala, Digger, Kwid and Dinkum. Yes, you read that lot correctly. If it was not all up there in the museum I wouldn’t believe it myself. Another suggestion was the Ming (the nickname of Prime Minister Menzies). That would have been great. They could have called the coins Gordons and there would have been 100 Gordons to one Ming (the Merciless). It would have caught on in a Flash!

It turned out that the ‘Royal’ was not popular with the public, so the government quickly backtracked and went for the ‘Dollar’. Why they didn’t just call it Pounds and Pence – with 100 pence making a pound – I have no idea. That would have decimalised it all in the same way the UK eventually did five years later in 1971 (also coincidentally in mid-February). Who the hell knows? They clearly wanted their own name for their own money but plumbed for the ‘Dollar’ which everyone automatically associates with the USA. Hmm…that worked well eh? The rest as they say, is history.

In 1988 Australia produced the world’s first polymer (i.e. plastic!) banknote – a $10 note to commemorate the Bicentennial of the first settlement. It proved a great success and in 1992 a complete set of polymer notes was issued. Way ahead of other countries, including the UK which has only recently introduced plastic notes. The Euro notes are still paper based and there is no sign of those being changed any time soon. Thereby proving how backward the European Union really is. (Sorry, I couldn’t resist that one.)

As if printing counterfeit polymer notes is not hard enough, there are an amazing 10 security features on the new polymer notes. Very sophisticated stuff.

Helping the Public with Currency Conversion

At the time of issuing the new decimal currency there were a series of leaflets and posters to help people adjust. I suppose they did a similar thing in the UK in 1971 but although I remember the new coins coming into effect, I really can’t recall anything in terms of public information literature. (I was only 6!). The character used to help the public was called “Dollar Bill”.

Look at the conversion rates in the second picture. One Pound = 2 Dollars. While this was referring to the (old) Aussie Pound it is interesting to note that it is pretty much the same conversion rate with the UK Pound today. 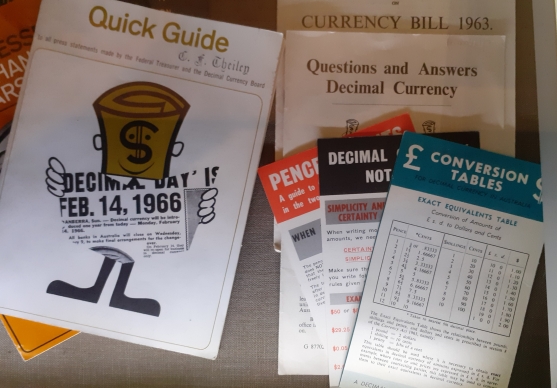