Since arriving in Australia I have discovered an interest in three things that I would previously not paid much attention to. I have not quite gone geeky on them yet. But my curiosity is almost turning into a hobby. The three things are completely different too. But the one common denominator is of course clear: Being Australian…

First there is the bird-watching thing I touched on in previous posts. More on this one below.

Second. I have developed an interest in the residential architecture. Not as weird as it sounds (and no disrespect to architects) because there are some interesting styles of housing that have a definite time-line and reason. I think the houses tell a story about how cities like Sydney grew up.

Third (or lastly) is the convict history of Australia. I find myself reading about different characters whose actions and decisions basically shaped present-day Australia. I guess that one is excusable (not that the other two need to be excused. I think it is hard to come to Australia and not be interested in its convict past.

Anyway, more on the second and third of these new found interests to come in future posts.

Budgies – Smuggling them is illegal…

Due to its location and climate, Australia is home to a wealth of bird-life. Much of it is what us northern Europeans would call ‘exotic’.

For us poor northern Europeans our first experience of an exotic bird would have been our first pet, the humble little budgie. (Budgerigar to give it its full name). When I was Dani’s age everyone seemed to be buying a pet budgie. Now of course they are more famous for being smuggled inside small swimming trunks. Allegedly. Ours was a blue one, called Peter for some reason. Probably because of that old children’s TV programme Blue Peter. Or some equally daft reason.

The budgie is not alone. This huge island is home to all sorts of cockatoos, lorikeets and other such “parrotry”. Is that even a word? Probably not, but I will claim it as it works to serve my point. Actually, parrots and lorikeets belong to the same family of birds while the cockatoos are from another group. The budgie is a member of the parrot family.

Here are some of the exotic birds we have seen and managed to photograph. Not being a full on twitcher (yet) I only get to take snaps of them if I am lucky. Very lucky and very quick in most cases. We have seen quite a few more…

The galah is widespread in Australia and a member of the cockatoo family. It has a distinctive salmon-pink neck and underparts. 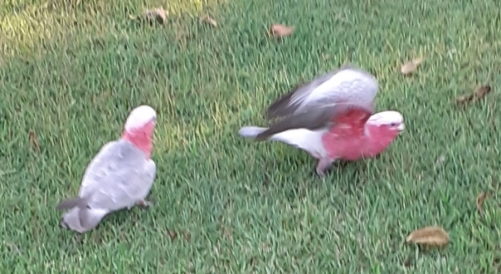 When I first saw the little corella I thought it looked like the psychopath of the cockatoo family with those big, wild, blue eyes. The large “eyes” turn out to be blue skin. They still look quite intimidating though eh?

Nothing New (for me)

I always did have an interest in bird-life. It stems from way back when I was Dani’s age. I used to go fishing with my grandad Danny (who our Daniel is partly named after). He not only taught us how to fish but he knew all the birds along the river, where they nested and could identify their eggs. He would often stick his hand into a bush where he knew they were nesting and pull out an egg to show us. He always put them back though. I loved all that. It brings back some great memories. When you go fishing you can relax and take in your surroundings.

Trying to get my lad interested in any such things is not easy. He would rather play with the iPad. That’s the (pre-coronavirus?) world in which we live. Will it change? Doubtful.

Oz also has its fair share of birds of prey. Not just the ones frequenting the bars where rich businessmen go for a drink. There are plenty of large predatory feathered birds too, including eagles with wingspans of over two metres. We are yet to spot these however.

We saw this one the other day in a park near the wine tasting areas. The black swan.

I have only ever seen white swans and now I know why. It turns out that this is the world’s only black swan. Every bit as majestic as the white swan and it is native to Australia.

I hope to update this blog with more bird sightings as and when we spot them (and photograph them) and get Dani involved in doing it.