This weekend we headed up to the Blue Mountains for a “Yulefest” celebration in Katoomba. Before that however we visited a toy museum in the next-door town of Leura and I think it definitely deserves its own post.

In as picturesque a setting as you could wish for the Leuralla Toy and Train Museum is in a beautiful house (called Leuralla), first completed around 1909 and was burned down in bush fires. It was rebuilt just before the start of World War One in 1914.

The house is built on the outskirts of the village of Leura very close to some of the many famous, steep Blue Mountains cliffs. 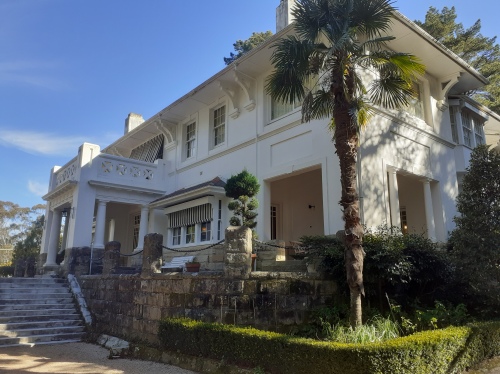 There are heaps of toys of all the old favourites from Popeye, Barbie, Tin-Tin, Dr. Who and James Bond, right through to more recent characters like Harry Potter.

It was nice to see Enid Blyton being well represented. One of her character’s Noddy made a few notable appearances.

Enough Trains for Everyone

There were plenty of model trains. Enough to keep any train enthusiast happy. This included parts of real old station buildings and some working model sets in the gardens.  The operational sets only work when you put money in a slot. Typical! But of course we did… Still a bargain excursion and well worth the money. 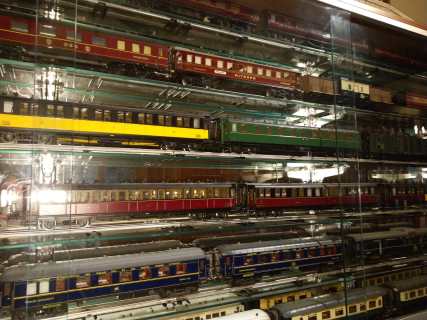 A Surprising Collection of Soldiers…

My brother and I used to buy boxes of plastic soldiers and a few tiny tins of paint to make them look more realistic. Then we would play war – as all  boys used to do back in the day. We had armies of German, Japanese, British and American troops and regularly battled it out like some second world war movie set. But I had never seen anything like what they had in this museum. 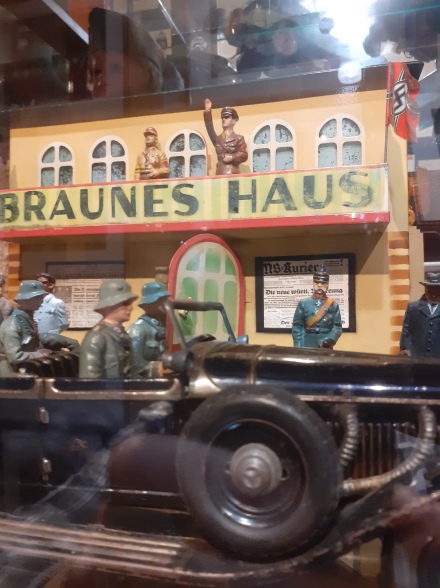 Fantastically preserved German/Nazi army and political figures from the time. All set up against realistic backdrops. I was amazed they even had these, never mind had the balls to display them. I have been to quite a few toy museums in the past and never seen anything like this. A truly amazing collection and incredible displays. But…they did have to do this…

I guess in these modern times where people are over sensitive to anything, they had to do this. Personally I think these things are historical and should be seen by anyone with an interest in history. Do they really need to produce and display this full disclaimer?  – (see below and zoom in if interested). It’s a museum for crying out loud! There will be things that we no longer make or have. There will be displays of things that happened or existed that are not considered OK these days. It’s called “history” folks! But I do understand that these places need to do such things because there are some idiots out there who just take offence for a living (or hobby)…

Who do you think you are kidding Mr. Hitler?

I thought it was a little bit funny. After all, we won. Didn’t we? Full battle scenes set up with some key characters for all to see…

And it wasn’t just toy soldiers that were being sold to kids in Germany at that time. I thought that these dolls were just spooky. And that was before I noticed the Nazi insignia armbands.

We did miss out on a couple of things I later read about. It seems they had toys re-enacting other historical scenes. Like one that supposedly led to the start of the first world war.  Models of that Serbian guy – Gavrilo Princip – shooting Arch Duke Franz Ferdinand in Sarajevo, Bosnia. Who says you can’t get a quick history lesson on an Old Dad blog?

The other one that we missed was a set of the assassination of President John F. Kennedy.  There are so many things to look at it, believe me, it is easy to miss a few toy-soldier-sized scenes. Shame really, as I may have been able to see who was at the grassy knoll when Kennedy was shot… Maybe next time.

For various reasons this is the best toy museum I have seen and I thoroughly recommend it.