As mentioned in previous posts, artists seem to be drawn to these remote and sometimes desolate places. Desolate they may appear, but there are many underlying factors in these outback towns that inspire artwork. One man only began his artistic journey after working an opal mine. This is his story.

The tale of The Chambers of The Black Hand.

Ron Canlin, a former Royal Marine originally from the UK, came to Australia in 1982 and bought an unwanted mine and tried his hand at opal mining. He only managed to eek out a basic living from the mine but is a classic example of those who came and stayed. Then one day while working in the mine he began to carve into the relatively soft sandstone rocks with an old butter knife. He soon discovered that the rock was easy to work with and so kept carving until he had produced his first sculpture.

The whole thing just mushroomed from there.  Ron managed to turn his relatively worthless mine into a most unusual underground art gallery, full of sculptures. The result is The Chambers of the Black Hand. A series of rooms, nooks and crannies where you can find dinosaurs, famous actors and singers as well as three dimensional copy of well known works of art such as the Sistene chapel and Last Supper. Everywhere you look these creations leap out of the walls.

They have added a number of “Where’s Wally” characters for the kids to try and find. You can clearly see one with the Beatles above. Some carvings are large and grand, copying the originals they were obviously based on. Others are tiny. Then there are plenty in between covering a full range of topics from animals, cartoon characters, super heroes and celebrities of stage and screen.

For me there are obvious similarities with the salt mine near Krakow in Poland. I still think that was one of the most incredible places I have ever visited. Now I can add this one to that list. 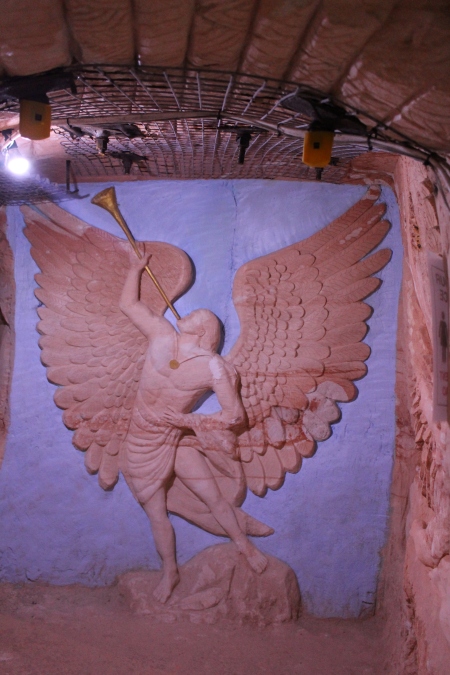 Due to this covid thing the self-guided tour was basically a one way walk through. But once you have stood in awe at the sheer number and variety of carvings you are sure to want to go around several times, as there are bound to be things that you missed. I took loads of photos as I walked through. Some a little too hastily that ended up too blurred. The ones in this post are just a sample…

The possibilities are endless and the underground gallery is forever expanding. Canlin looks for inspiration in pictures from books and newspapers. He then digs out a new space in his mine with a jackhammer, renders a wall and then begins carving the new exhibit. The working sandstone surface is perfect. Stable but easy to carve.