The town of Berry is only about 140km south of Sydney but is a world away. Still with all the modern conveniences of course.

The town was originally called Broughton Creek but the name was changed by an Act of Parliament in 1890 to Berry in honour of Alexander Berry who had established the nearby Coolangatta Estate in the 1820s. The estate (later run by Alexander’s brother David) spawned the town.

It is one of those places that everyone says is “nice”. (That word you were told not to use by your English teacher. Well, at least that was the case in my day.) It certainly is a pleasant little town.

The town seems to be thriving with many boutique and specialist shops. There are plenty of good restaurants too. The only problem – with anywhere like this – is the traffic and the crowds. I think a sunny Sunday is probably the worst time to visit such places but it is the weekend… I read recently that there are plans to make the centre of town around Queen Street) ‘pedestrian friendly’. That would be a great improvement on busy (touristy) days like this one. 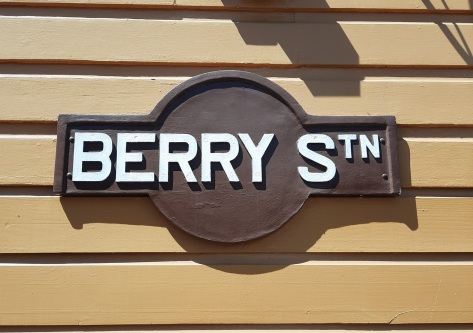 We saw a long goods train, coming from the south, passing through the station. I have no idea where it came from as the passenger service doesn’t really go much further. Maybe the line runs all the way to Melbourne? Does anyone know?

Berry, which is only 10 m above sea level and only (just over) 8 km to the east lies the magnificent Seven Mile Beach.

There are main entries to the beach at either end with the urbanisations/towns of Shoalhaven Heads at the south and Gerroa to the north. There are one or two small tracks leading through to the beach between those two spots. It is yet another huge beach in New South Wales. Seven miles is just over eleven kilometres. It is enormous so finding a quiet space on the beach is easy. Even given the size of the beach it still seemed unusually quiet. The car park we used was not even full. No complaints from me though…

Between the beach and the road sits the heavily forested Seven Mile Beach National Park. The density of trees in these places never ceases to amaze me. I am sure you could fence these places off and many endangered species would thrive in there.