Although many of the unsealed roads were closed the odd one was still open. So, we took off into the Back o’ Bourke to have a look around. Into the outback…

Although Dani and I had seen several Emus during our time around Lightning Ridge, we had not managed to get close enough to photograph them. They say that you should not get too close to these large birds but that would seem harder than it sounds. They are very timid.

This area is definitely Emu country. They are easily spotted in the fields or low bush at the side of the roads. There must be thousands of them hidden in the denser bush areas.

I think the official name for these creatures is Tiliqua rugosa but I am not sure of its common name. Maybe one of you readers can help. What do they call them in Australia?  Is it a blue-tongued skink a bobtail or a shingleback?

If you see a sign like this one then you just have to stop for a beer. Right? No pub for 150km! No choice then mate. Pull over in 3 for cold one.

Well we did just that. 150kms is a long drive when you are thirsty. This was the Warrego Hotel and bar in the tiny outback spot of Fords Bridge.

All of these tiny hamlets (if you can even call them that) seem to have sports pitches of some kind. There are very few peole who live in these places but there are more who live in the surrounding stations (or ranches or farms – depending where you come from).

Anther tiny settlement with a good old outback pub is Enngonia.  Heading north to the Queensland border, blink and you miss it. As small as it looks there is a pub, War Memorial Hall and sports fields. The pub doubles as a general store selling pretty much all the essentials. 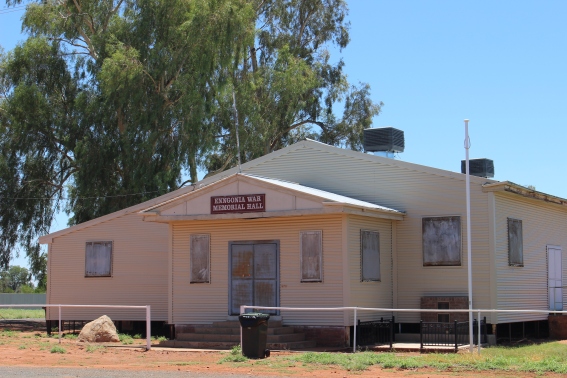 We even drove up as far as the Queensland border but the police were there to ensure nobody left the leper state of NSW. Especially if they had come from the ‘cluster’ capital of Sydney. Fucking pathetic if you ask me but what the hell?…

I wanted to go to Mount Oxley but the road was closed. We only got to see it from a distance. It is an oddly flat table top mountain in an otherwise flat landscape and stands out on the horizon, not unlike Ayers Rock (Uluru).

There is an odd mystery associated with Mt Oxley. Early explorer Charles Sturt noticed that sometimes, around sunset and after a very hot day, booming noises seem to emanate from the mountain. Sturt himself thought it may be due to gas explosions. He even noticed craters appearing in areas where he thought there had been ‘explosions’. No conclusive explanation has been found for the  noises and craters but one possible theory could be correct. The sudden contraction of the rock upon cooling at sunset after exposure to the heat of a very hot day causing the rocks to crack with a bang!

The road that runs parallel to the Darling river toward Wilcannia was also closed and this was one we wanted to take. That road is also the access to two national parks; Gundabooka and Toorale. There are more than enough reasons to visit the Bourke area again. Maybe… in the not too distant future…