Last weekend Dan went to his first rock concert. Well to be exact it was a group performing in a bar especially for the kids although the parents seemed to enjoy it just as much. I certainly did.

I even knew one or two of the Spanish kids songs that they managed to rock up. I also realised that I do not know the words to that most common and simple of Christmas songs – Jingle Bells – which they sang in English.

Dani has been trying to sing it for a week or so now as they are learning it in school. I more or less knew the first verse but the second verse was completely new to me. And who the hell is Fanny Bright anyway? How many of you know it I wonder?

They also played an old favourite for most adults and currently one of Dani’s most sung numbers – Bear Necessities, from the Jungle Book. Unfortunately they sang this one in Spanish and Dani has only ever heard it in English from the Disney cartoon. 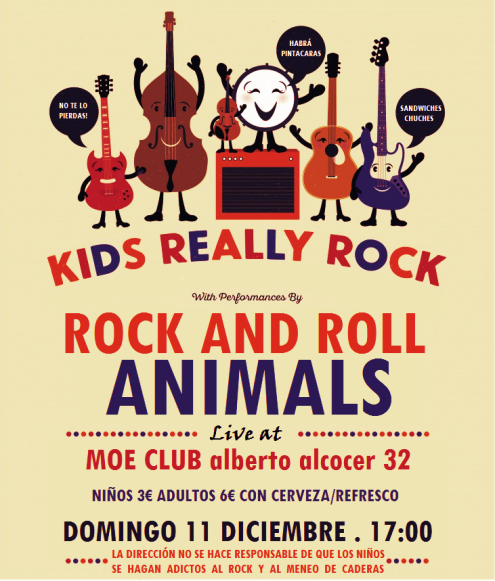 The best thing about the concert was how much Dani loved it. He knew enough of the songs to sing along and generally had a great time.

The group was a five piece who performed under the name Rock and Roll Animals. They perform for adults only in similar venues but I don’t know what they are usually called.

Just to finish the show they performed a well known oldie especially for the mums to sing along to and it was one I remember well. Video Killed The Radio Star. a great end to a great show.

We will be looking out for more of those show…