About one hour and 30 minutes drive south of Sydney, and inland, is an area known as the Southern Highlands. A rural location where farming and vineyards are the order of the day and have been since around 1830. That’s when the small town of Berrima was founded.

Today it is an historic heritage listed site where the town is basically one big museum for that period in time.

The place is more of a village these days with the two main buildings that dominate the area being the old Gaol and Greco-Romanesque Court House. Both almost look out of place today.

When the railways were built Berrima was by-passed while the nearby town of Bowral got a station. While Berrima declined rapidly, Bowral expanded.

In Berrima there are plenty of the original buildings still intact. Most are now used for things other than their intended purpose. Most are now either shops or tourist accommodation but there are still dwellings for the locals. 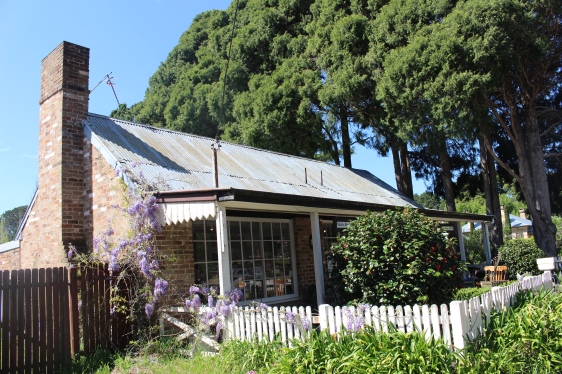 There were many inns in the town and while most of them still stand although only one or two still offer a refreshing beer these days. One that still operates as a pub claims to be the oldest continually licensed inn in the country. Good enough for me. Of course I had a pint there.

The area is well known for wine production. While not as  intense  as the Hunter Valley to the north of Sydney there are plenty of reasons to come back to this area and partake in a spot of wine tasting.

Another reason to return is the local river. The oddly sounding Wingecarribee River runs by the village and is supposed to be a great location for spotting the duck billed platypus. Although the platypus is known to come out mainly at dusk and dawn so we need to time that one better. This afternoon was too hot and too light for them.

When the railways were built the nearby town of Bowral got a station and now it is a fair size town. It is still a stop on the  Sydney to Canberra line.

The town is famous for a couple of things. Firstly the writer of Mary Poppins once lived there. Yes, that’s right. She just lived here, wasn’t born there, and didn’t even write the book there – as far as I can tell. But hey… It’s a kind of claim to fame eh? And here is the statue to commemorate the fact.

Incredibly, that tenuous link with the creator of Mary Poppins stands right beside this place…

This is the Donald Bradman museum and International Cricket Hall of Fame. Bradman, arguably the greatest cricketer ever (and almost certainly the best batsman). Bradman definitely has a huge link with the town. He moved to Bowral when he was 2 years old. He grew up there and learned tho play the game of cricket there. At least this place belongs in the town of Bowral but it was closed when we passed by. Although I am not an avid cricket fan I do appreciate how good Bradman was. This place definitely warrants another visit.